The family-owned company that invests in its personnel and workplace safety.

With expansion and new investments, the need for an oil mist solution became obvious. Two oil mist eliminators from 3nine became the solution and the start of a long term collaboration.

The Swedish company Bröderna Carlsson started its business in Motala, Sweden, in 1959 by producing molding tools for the Swedish industry. Three generations and several investments later, the company has a modern and advanced machine park with several machine tools, approx 20 employees and a focus on further expansion.

They still have one foot in the production and development of molding tools, but since 2004 they’ve also become specialized in contract manufacturing and precision machining. Their niche lies within the production of large and few details, one example is that they produce parts to the world’s largest gas turbine in Germany. Since four years back, they’ve also taken the step to become certified in order to be able to deliver solutions and services to the aerospace industry.

To become a player within the aerospace industry, investments were required. Through the Swedish machine tool reseller, Stenbergs, Bröderna Carlsson acquired two Okuma machine tools and one measuring tool. They educated their staff and achieved, as one of six machine tool manufacturers in Sweden, the AS9100 certification. After a successful prototype production, Bröderna Carlsson was authorized, in one of the largest volume projects in the world, to start manufacturing engine parts for aircraft engine manufacturer Pratt & Whitney through GKN Aerospace in Trollhättan, Sweden.

To manufacture parts for the aerospace industry requires extremely high precision. All parts manufactured go through accurate measurements, are marked with unique serial numbers and documented both digitally and analogously. The manufacturing takes place in several stages and in different processes of turning. By the CNC lathe V920EX from Okuma, where most of the machining for this project takes place, the oil mist problems became obvious at once. 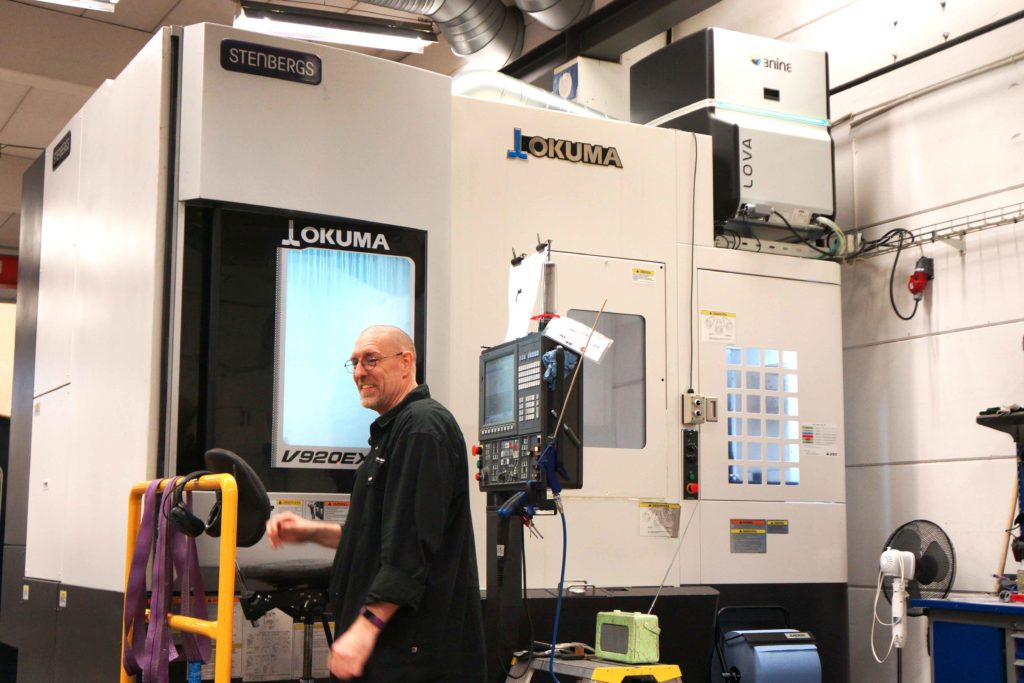 Machining by the Okuma lathe means opening the doors every so often. The oil mist spreads directly throughout the shop, and it becomes dirty and greasy all over. After installing the oil mist eliminator from 3nine, we no longer had those problems.

An investment in Clean Air

With the oil mist problems by the CNC lathe from Okuma, the management at Bröderna Carlsson again contacted their partner Stenbergs, who in turn recommended an oil mist eliminator from 3nine. After a visit from André Nordgren at 3nine, they chose to invest in two oil mist eliminators from 3nine’s GREEN LINE series. An oil mist eliminator from 3nine can be installed directly on the machine tool, which saves both valuable floor space and unnecessary piping. After six months in operation, both management and employees at Bröderna Carlsson are very happy with the result. Besides clean air in the workshop, they also recover and reuse large amounts of cutting fluids at the Okuma lathe.

The oil mist eliminators from 3nine are based on a unique disc stack technology that separates 100% of all the liquid particles down to 1 µm, leaving only the smallest particles to the final stage HEPA filter. Besides requiring very little maintenance and filter changes, they give you the ability to recover and reuse the oils/coolants used in the process.

To me, it goes without saying that we should all work in a clean and safe environment. Bröderna Carlsson is a family-owned business, my son works here, I’m at the production floor myself several times a day. If you ask me, there should be no difference in the air quality in the production hall and in the offices.